Panerai Luminor Quaranta (PAM01371) is a unisex sports watch that fits both men’s and women’s wrists.

With its Italian roots, Panerai is known for its spectacular diver’s watches that do not apologize for their existence. The name Radiomir, originally given to a radioactive luminance substance, eventually ended up as the name of the diver’s watches produced before the Second World War for combat divers of the Italian Navy. As an anecdote, we can also mention that the watches were manufactured by Rolex in Switzerland and Panerai had permission to modify them to meet the requirements of the Italian Navy.

The Luminor name saw the light of day in 1949, when Panerai patented a tritium-based luminance mass, which was used in all diver’s watches from now on. The Luminor name also became the name of the diver’s watch collection, which had and still has today Panerai’s signature – patented in 1956 – locking mechanism for the crown.

Today, the most common size category of watches in the Luminor collection is 44 millimeters, which fits most wrists – including mine – well, but is certainly a bit big. The step smaller size range has been 42 millimeters and then for bigger wrists there is a 47 millimeter size range in the collection. If you have wanted a more restrained size Panerai on your wrist, you have turned your attention to the more fashionable Luminor Due collection, the core of which is made up of watch models in the 38 millimeter size range.

The fashion of the Panerai Luminor Due collection comes to the fore in more colorful models, as well as 30-meter water resistance sufficient for the deck of a yacht.

Fortunately, Panerai has recognized the need for a watch model with a more modest size, but at the same time waterproof (100 meters), which it responded to in November 2021 with the Luminor Marina Quaranta (now simply Luminor Quaranta) model series. The model series includes three different colored dials (white, blue and black) with the sandwich dial made famous by Panerai and favored by die-hard Panerai fans. In addition to the hour and minute hands, the watch has a small seconds dial at nine o’clock and a date display at three o’clock.

The cushion-shaped case of the watch is satin-finished, except for the fixed bezel, which is polished. The watch has a vintage-inspired, slightly raised sapphire crystal. Underneath the steel back cover ticks the P.900 automatic movement, which provides the watch with a power reserve of three days.

The luxurious ensemble is completed by a high-quality strap made of alligator leather with a steel buckle, the Panerai logo is engraved on the brushed surface. The strap is black in the white and black models, dark blue in the blue model. All straps have the same color on the edges of the stitching.

In my opinion, the Luminor Quaranta is the manufacturer’s most versatile watch with a size of 40 millimeters, because it can withstand carefree use in terms of its technical features, while at the same time being a successful alternative for everyday life and parties in terms of style. 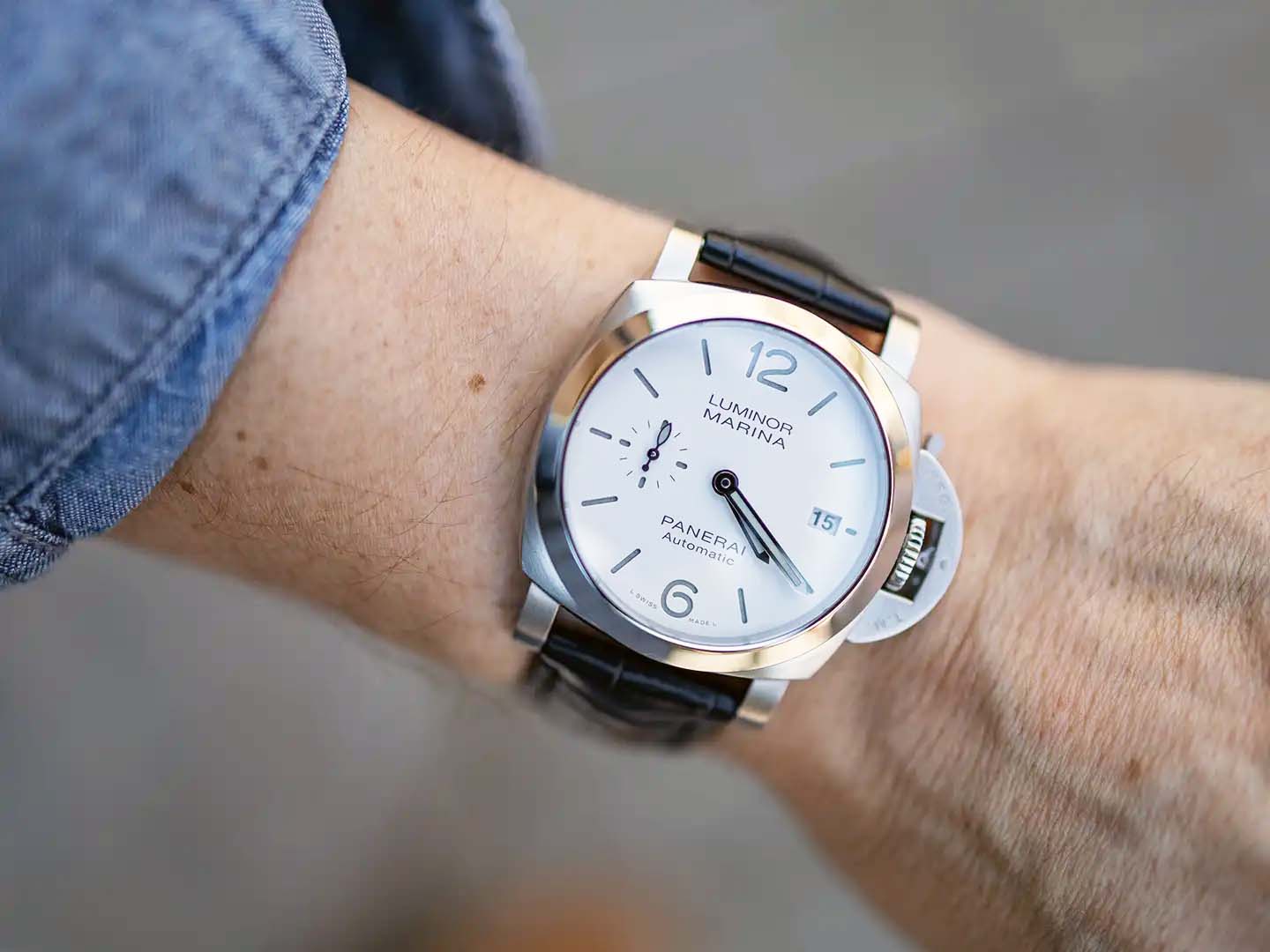 For its restrained size, the Luminor Quaranta is a great unisex watch that I can easily see on both my wrist and my wife’s wrist. My choice from the model series is the white PAM01371 shown in the pictures.