Longines is a traditional Swiss watch manufacturer, whose image has been tarnished this past decade by a sort of lack-of-oomph, but which is seeing a resurgence – at least partly due to the continuing wake of the heritage boom. Longines has brought back old watch models as re-issues and these have really spoken to today’s watch buying crowd – most likely due to the fact that prices have been kept reasonable.

This is where Longines’s strength – and weakness lie. As the re-issues have rolled onto the market, the newer watch models have been left in their shadow, at least metaphorically. The truth, as always, is somewhere in between, but currently Longines offers most to the buyer who is enticed by the classic and retro look. In some ways, Longines is a watch brand that doesn’t kid around.

Longines’s answer to the heritage boom was their Heritage collection, that features timepieces for many aspects of life, from more formal situations all the way to leisure time pursuits. In Longines’s own words, their collection is made up of watches that have been tested on the ground, the sea and in the air. As one looks at the collection, this is plainly evident, with the diving watches being highlighted in a positive way.

The most well known of the Heritage range is the Hour Angle, designed by the first man to fly over the Atlantic, Charles Lindbergh in 1931, that has been an undeniable hit in its re-issue.

The Longines Heritage collection features diving watches from many time periods, but we’ll be looking at the Longines Heritage Diver, whose background is towards the late 1960’s – or more exactly, to the Longines Ultra Chron model. The watch is easily recognizable from a distance due to it’s period typical c-shape steel casing, which is rather slimline compared to today’s diving watches. Due to this, the Heritage Diver suits smaller wrists and can even slip under a shirt cuff without hassle.

The casing has been imbued with an interesting 12-faceted pattern – the positioning of which, according to photos, varies from watch to watch. This would seem to be purposeful, giving each watch a sense of uniqueness. 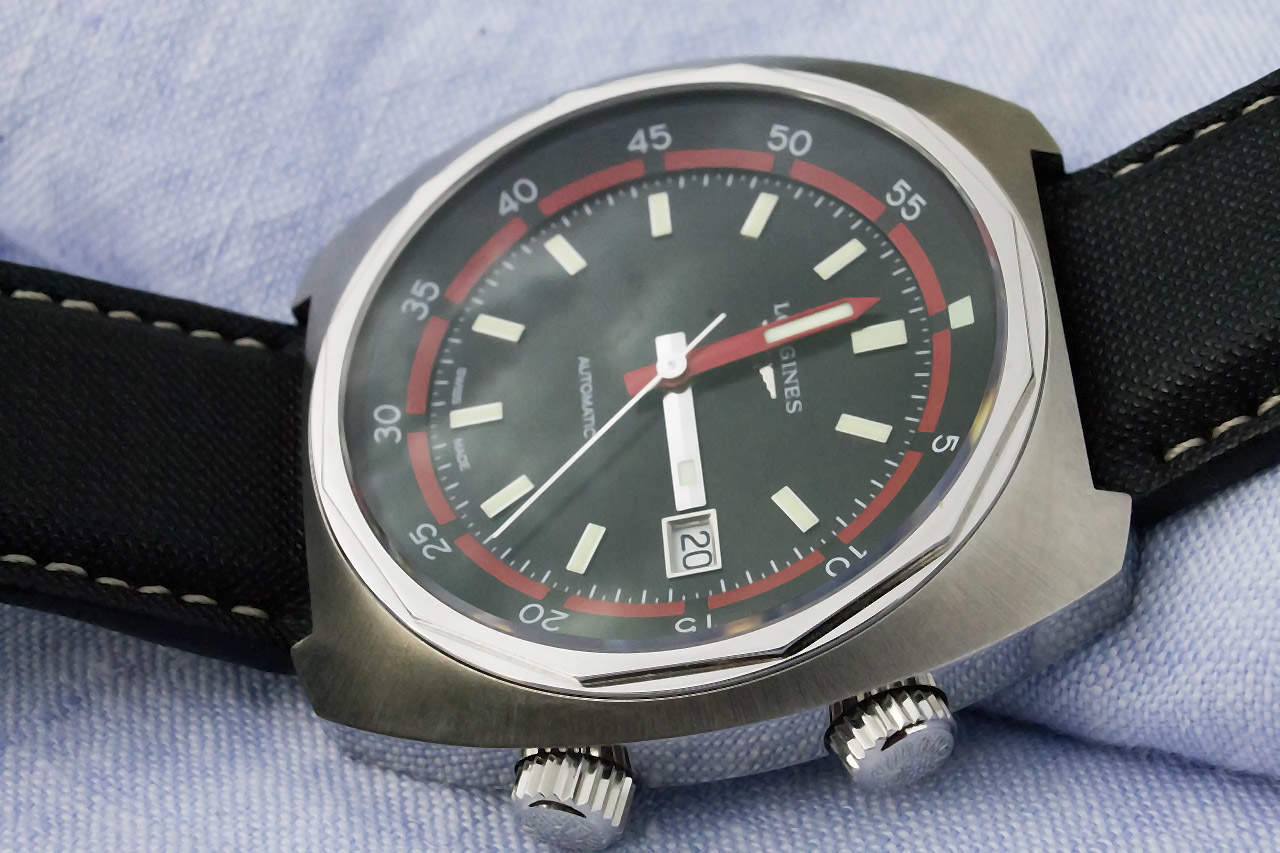 The watch face has, unlike most diving watches, been constructed in a way that the bezel is located behind the glass, instead of around it. This, in part, ensures that the position of the bezel isn’t inadvertently changed. In this case, it’s mostly due to the design of the timepiece, where an inner bezel just looks better.

Usually the bezel only rotates counter-clockwise, its purpose being to mark the end time of a dive while scuba-diving – with the counter-clockwise rotation preventing accidental overtime dives.

The watch face itself has a black background, which has been given some 1970’s racing flare with a British Racing Red minute hand and inner bezel lining. The hands and indexes are coated in Super LumiNova treatment, giving them an excellent phosphorescent luminosity. The crown-operated bezel curves upward to the glass, bringing a delightful three-dimensionality to the watch.

The satin finished watch face has had all unnecessary texts and markings omitted, leaving just the date window and a crisp and understated look. The driving mexhanism is a specifically modified ETA 2824-2 movement, that has been labeled as the L663.5.

The watch sports two thread-lockable crowns, one for turning the bezel and the other for the usual time and date adjustments. The movement on the crowns is light and using the hacking method adjusting to the correct time is a breeze, despite a slight oversensitivity. 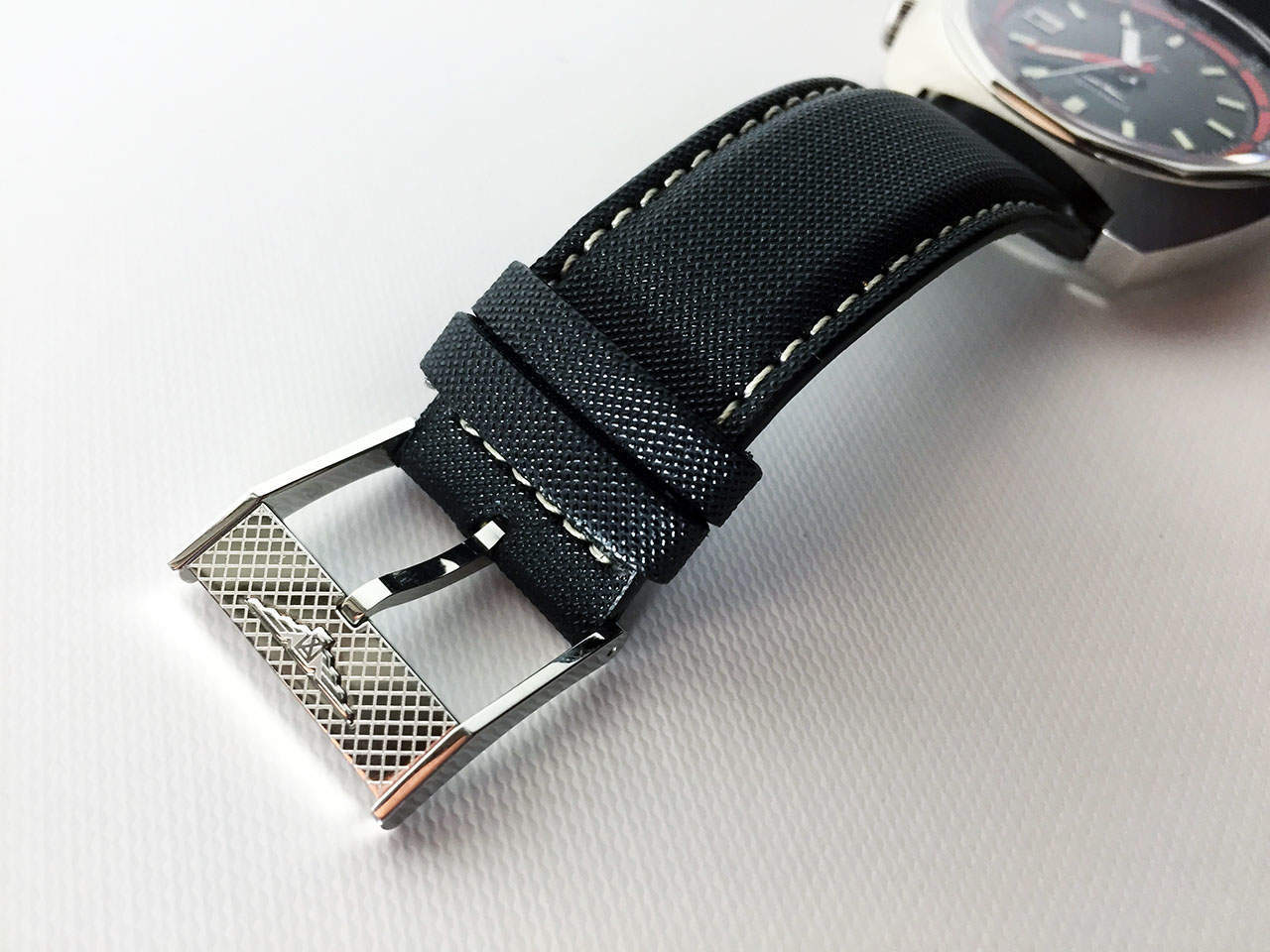 Watersports in mind, the weakest link of the Heritage Diver is the synthetic bracelet, which should really be replaced for a rubber one when swimming. If the watch is going to be dunked regularly, it can also be ordered with a rubber strap. Naturally a third-party substitute can also be procured, from say Hirsch.

When comparing the Heritage Diver to today’s mainstream diving watches, it stands out as a very stylish, dressy watch. The first thought that springs to mind is, dare one swim, let alone dive with this? 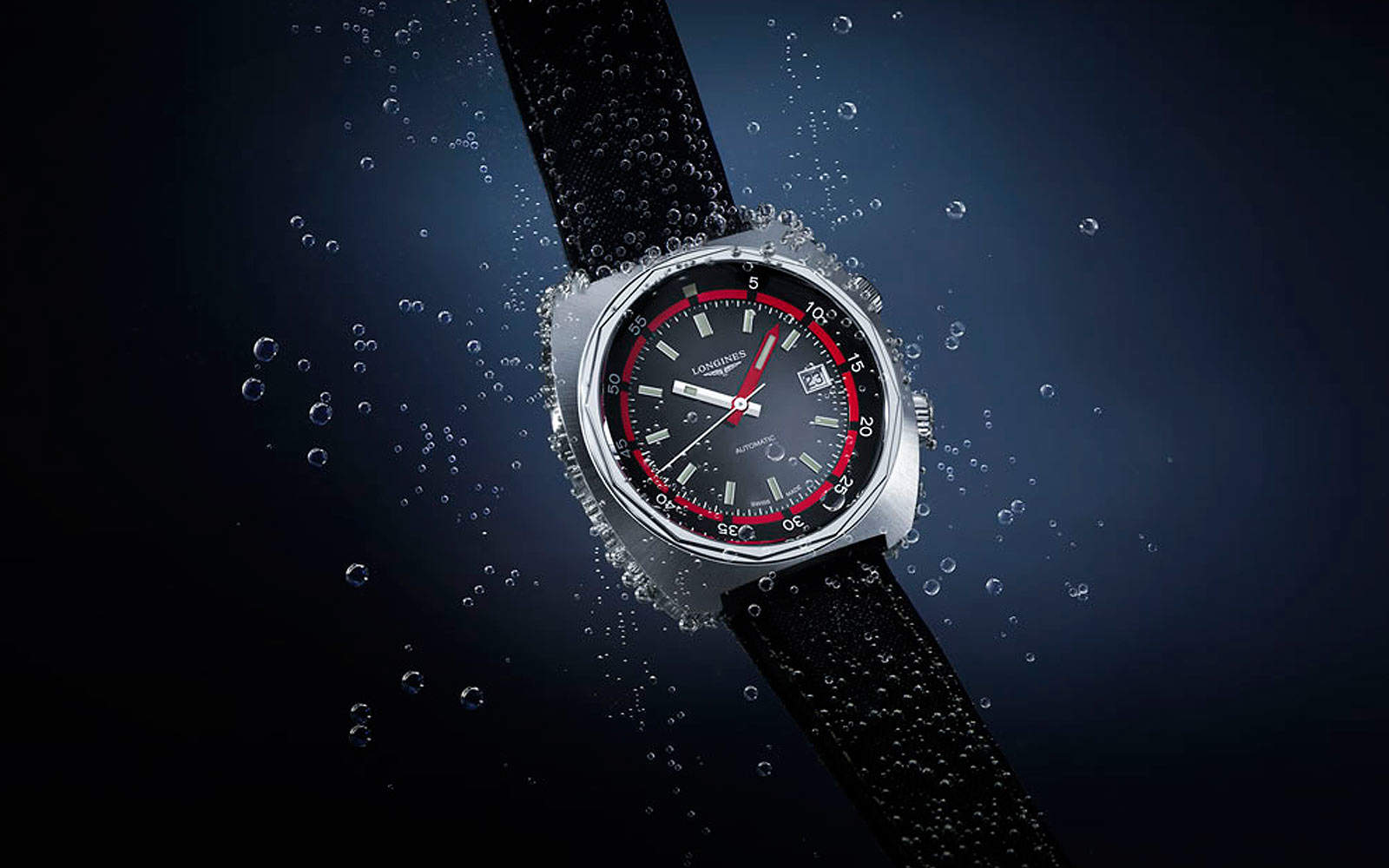 The answer is – yes. The Heritage Diver is just that, a diving watch, whose 300 meter water resistance rating guarantees that one can, quite without worry, shower, swim and dive with the watch on. Of course very active divers will find more suitable watches on the market, but the Longines isn’t afraid of the water.

Due to its moderate size, the watch works well with many types of dress, from the beach to the office. Although the watch features those emotion stirring red facets, it has been found to be sedate enough to be worn with a suit. The Heritage Diver does really become more relaxed outfits, bringing that classy and sporty finish to an ensemble. For formal occasions, when wearing a dark suit, it is best to go with a more modest dress watch.

The Longines Heritage Diver is a vintage spirited diving watch that can be used in a variety of day-to-day wear situations. The Heritage Diver and other Longines watches are sold in Finland by the Suninen jeweler’s.