When one wishes for style, beauty and elegance in dressing, and in life in general, the Swiss brand Chopard is at the top of the list. It’s easy to understand why, as when one looks and feels the products for oneself, it becomes evident why elegance is the most fitting word to describe Chopard.

Chopard is a breath of fresh air amongst the hard world that is corporate business, as the company incorporates softer values, such as sustainability and ethical sourcing in its core. These could be called the company’s family values, and family is at the core of Chopard, which has remained independent and family owned through the decades.

Chopard was founded in 1860 by Louis-Ulysse Chopard (b. 1836) in his home village of Sonvilier, Switzerland. Originally Chopard focused on precise and decorative pocket watches, which were sought after throughout the societies of Europe. Some of the most renowned clients included the last Russian Czar, Nikolai II, who, just like others, appreciated Chopard’s ability to deliver on even the most exacting of requests.

After the death of founder Louis-Ulysse Chopard in 1915, the mantle of the company passed to his son Paul-Louis and grandson Paul-André Chopard, under whose guidance the brand focused on creating pocket watches of unsurpassed precision and beautifully adorned ladies’ watches. The Art Deco style movement was cresting at the time, and aspects of the style are evident in Chopard’s products from this period, clearly demonstrating they had their finger on the pulse.

During Paul-Louis Chopard’s time, the factory moved twice, first in 1921 to the cradle of the Swiss watch industry, Chaux-de-Fonds and second in 1937 to Geneva, the capital of European watch design. The move to Geneva provided Chopard two distinct advantages, the first was the “Geneva Seal” – a high accolade in the industry; and the second was the increase in sales due to a more central location. It was easier to attract the international buyers in a city frequented by cosmopolites.

Chopard passed on to the third generation, Paul-André, during the Second World War in 1943. The period following the war was a difficult one for Chopard and others in the industry, as the reconstruction of Europe was focused primarily on basic infrastructure and less on luxury items. The decline drove Chopard into difficulties – ones which Paul-André, known more as a watchmaker than a businessman, was unable to repair. Since he had no heir to inherit the business, Paul-André decided to look for a new owner for the Chopard brand.

Founded in Pforzheim in 1904 by Karl Scheufele I, the watch and jewellery business had been passed down from father to son until Karl Scheufele III decided to secure his legacy by incorporating a Swiss brand, preferably from the watch capital, Geneva. He visited numerous factories, but it wasn’t until visiting Chopard that he felt he’d found what he was looking for. Paul-André Chopard likewise felt the right match had come along, and he sold the Chopard name and company to Scheufele.

In 1974 Chopard moved facilities to the municipality of Meyrin in the Canton of Geneva, where it still operates to this day. In 1976 Chopard released the first watch with what would become the brand’s trademark, a free moving diamond behind sapphire glass.

In the 1980’s Chopard began production of men’s’ sporting watches and women’s jewellery. Watch production was brought to a new level in 1996, when Chopard opened their own movement production facility in Fleurier, in the Canton of Neuchâtel, Switzerland. Prior to this, Chopard’s movements had been assembled from undisclosed parts from third parties.

The Finnish retailer for the Chopard brand for over two decades, Aseman Kello first took the brand on for the jewellery, as there was a distinct scarcity of luxury jewellery brands appropriate for the clientele. The Chopard line was first offered at the Helsinki Airport location of Aseman Kello, and later in central Helsinki as well.

Chopard has a distinct advantage, in that mechanical movements are preferred in watches.

Chopard’s watch concept, particularly in the women’s range, is based on the “Happy Diamonds” idea, known from jewellery, where freely moving diamonds and other precious stones are sandwiched between clear sapphire crystals. These Art Deco themed watches are a natural continuation to the Happy Diamonds jewellery range, which represent Chopard’s affordable luxury segment – jewellery that consumers can afford when desired. 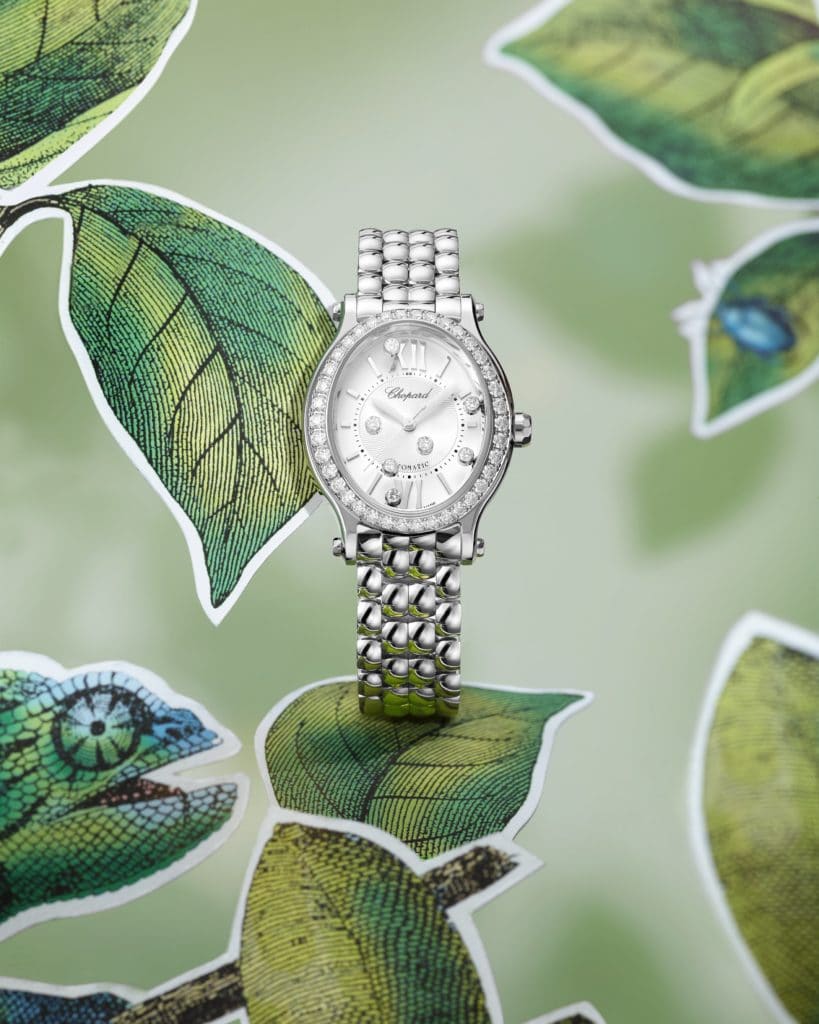 The popularity of Chopard’s men’s watches is based around the aforementioned L.U.C. range, which use eponymous movements. These high quality in-house manufactured mechanical timepieces are produced in gold and steel cases. Those with a passion for horology will appreciate the Chopard tourbillon watches, with eight days of power reserve.

The more price conscious and sporty clientele have in turn fallen in love with pieces such as the racing chronographs produced together with Mille Miglia, that currently use movements from partners – although Chopard is moving toward self sufficiency in movements as well.

The other end of the spectrum in Chopard’s jewellery range is held by the Cannes awards jewellery, the Red Carpet unique pieces worn by world famous stars from the heights of fashion and the silver screen.

There is a quintessential Chopardness to Chopard jewellery, that sets them apart from all other jewellers’ pieces. This fact is important to wearers of Chopard, jewellery and watches alike, as they prefer to carry something of exceptional quality that they’re not likely to come across worn by someone else. Just as it is with formal wear. ?

Ethics at a Premium *

At the 2018 Baselworld watch and jewellery show, Chopard announced a shift to 100% ethically sourced gold in all their products by July the same year. The ethical sourcing of diamonds has been a topic of much discussion in recent years and most companies have matters in hand with regards to them, but Chopard is the first in the industry to bring these topics to the forefront of their message and has also committed to the UN’s Agenda2030 for Sustainable Development. 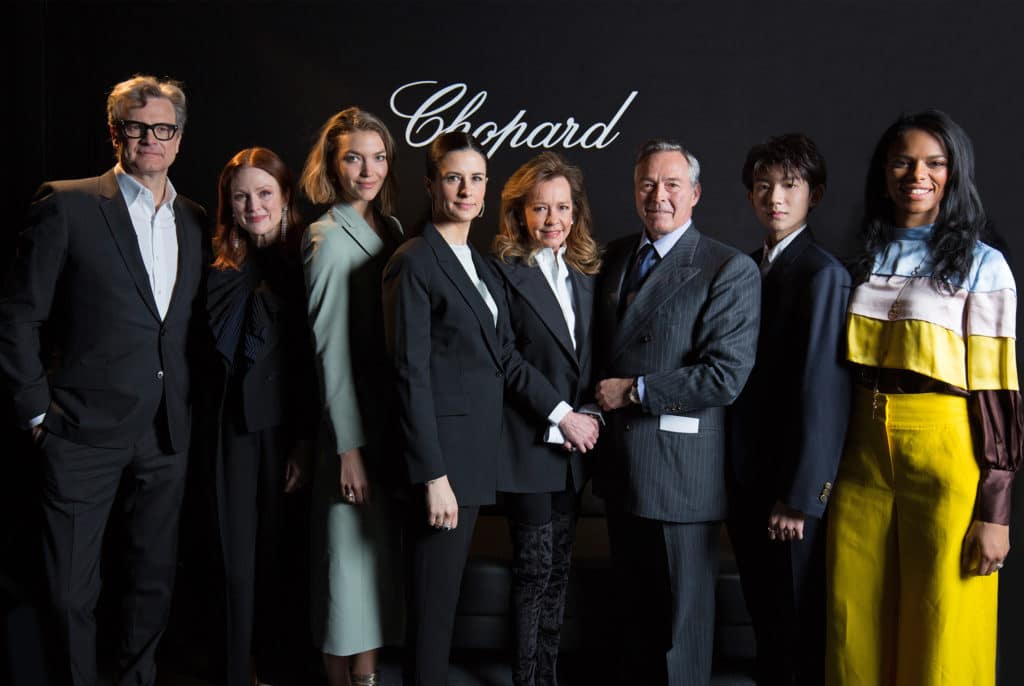 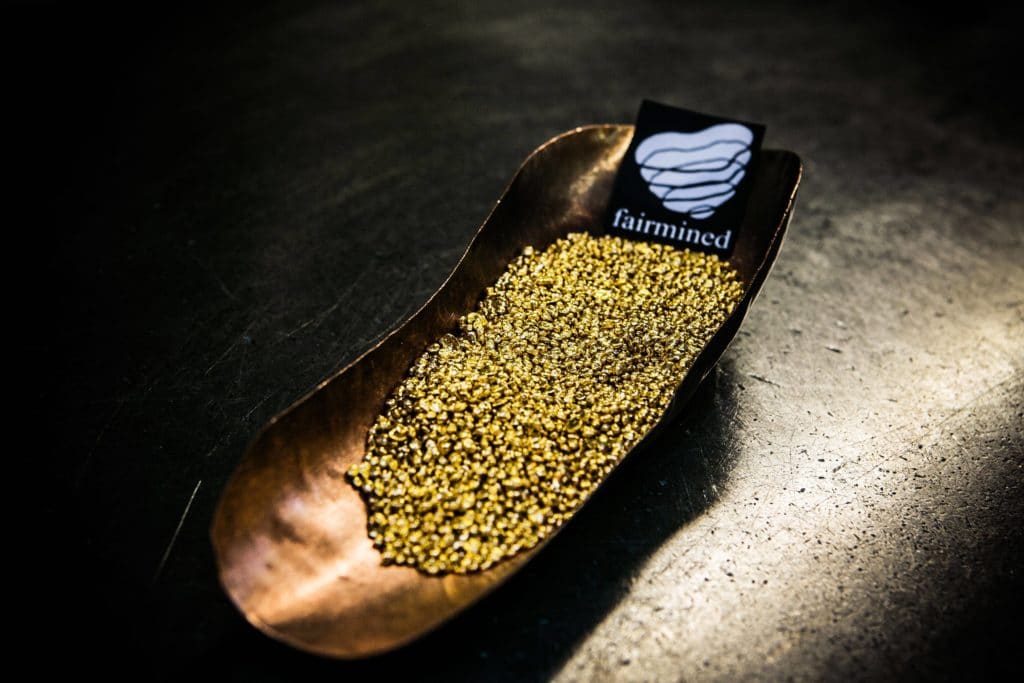 Chopard feels that being ethical needs must apply to the whole chain of production, meaning fair play, decent working conditions and wages throughout. In this too, Chopard wants to be the torchbearer, on what they call “The Journey to Sustainable Luxury”.

Seppo Kallioniemi of Aseman Kello says Chopard is a luxury brand that one has to fall in love with. The typical client is between 30-40 years old, a person who appreciated the highest quality and wants to truly stand out with their choices.

Seppo Kallioniemi has noticed that the zeal for Chopard often begins with a single Happy Diamonds piece, which is later complimented by a second and third piece. The other route into the world of Chopard is through a watch, later rounded out by jewellery or other accessories.

As mentioned previously, Aseman Kello has worked as a retailer for Chopard for over twenty years. In addition to high quality and beautiful items, it was the family run aspect of Chopard that has made it such a close partner with Aseman Kello.

You can dive in to the world of Chopard at Aseman Kello in Helsinki.

Matti Airaksinenhttp://stylefellow.com
Stylefellow's co-founder and publisher Matti is also a founder and editor-in-chief of Tyyliniekka which is the most popular menstyle and watch online magazine in Finland. Matti is also a serial entrepreneur and internationally awarded member and senator in Junior Chamber International.

BREAKING NEWS: Bvlgari is out of the Baselworld 2020 – TAG Heuer, Zenith and Hublot continues

The novelty celebrates the ORIENT's 70th anniversary of the Japanese watch brand as a manufacturer of mechanical watches. Since 1950,...

The world's largest watch fair, Baselworld, has been canceled. The reason is the coronavirus epidemic, which has resulted in...

BREAKING NEWS: Bvlgari is out of the Baselworld 2020 – TAG Heuer, Zenith and Hublot continues

Luxury brand Bvlgari (part of LVMH Group) informed today its withdrawal from this year Baselworld. However, the LVMH watch...

In just a few years, Parisian origin Bell & Ross has risen to become one of the most interesting...

ABOUT US
Stylefellow is your guide to a stylish life.
Contact us: [email protected]
FOLLOW US
© Copyright Miehistömedia Ltd